CAEN recently opened the doors of its R&D to the open FPGA technology, which is becoming more and more widely used and required. In addition, we decided to invest many resources in order to make this technology accessible to everyone. These efforts result in the brand new x5560 Programmable Digitzer family and the SCI-Compiler software for easy-programming of the open FPGA.

The x5560 is a 128/32 Channels 14-bit 125MS/s Open FPGA Digitizer Family, designed to attain programmable data processing capabilities. The x5560 family is suited for experienced and newbies users thanks to SCI-Compiler user-friendly software, that simplifies firmware coding with a block-based visual programming language.

The x5560 Digitizer Family was born as a solution for large experimental setups for neutron detection with 3He tubes, but thanks to its flexbility, it is suitable for the readout of a wide range of detectors (PMTs, Gas Tubes, Segmented HPGe, ….)

This Digitizer is available in Rack or Dektop form factor:

The rack-mount R5560/R5560SE are optimal solutions for large experiments requiring fast digitization of analog signals and usage of several digital lines. The board is designed to easily support multi-board synchronization and interconnection, with the possibility to acquire 128 channels and scale up to thousands of channels.

The Desktop solution DT5560SE is more suitable for lab development, prototyping and system testing. Thanks to the 32 Single-Ended Channels on LEMO connectors, it allows an easy connection to the detectors and speeds up the development time.

The x5560 Open FPGA Digitizers are designed to help users in building a customized acquisition system fitting the needs of their detectors and experimental conditions. The applications of the x5560 ranges from nuclear spectroscopy to ASICs readout, from neutron physics to Silicon Photomultipliers detection systems. The firmware, the readout software and some design files are distributed for free and open source so that the user can easily customize them in order to implement a full and complex experimental readout system on a single board.

The x5560 Digitizers are fully supported by SCI-Compiler, a Windows-based graphical development system for easy FPGA programming. This tool allows to develop and compile the firmware code using graphical blocks which represents the functionalities needed for firmware implementation. SCI-Compiler automatically generates the VHDL firmware code starting only from logic blocks and virtual instruments that can be connected together in the GUI and, moreover, it generates C/C++/C#/Python Libraries for custom software development.

The R5560 was born for 3He tubes readout in neutron detection experiments and it is suitable for the readout of large arrays of detectors (PMTs, segmented HPGe, Gas Tubes…) using a customizable platform. In fact, it is possible to take advantage of the powerful SoC mounted onboard to write a custom pulse processing algorithm on the open FPGA as well as build a middleware/software that fits the needs of the application of interest.

The R5560 is a solution for large experiment. The rack mount solution simplifies the experimental setup in case of multi-board systems, where an effective space management is often a constraint. Moreover, it optimizes the cost for the installation: it does not require any crate or external power supply and it reduces the cabling cost thanks to the differential analog inputs on RJ45 connectors (a single CAT5e cable to carry 4 analog inputs) and the single-link synchronization capabilities. 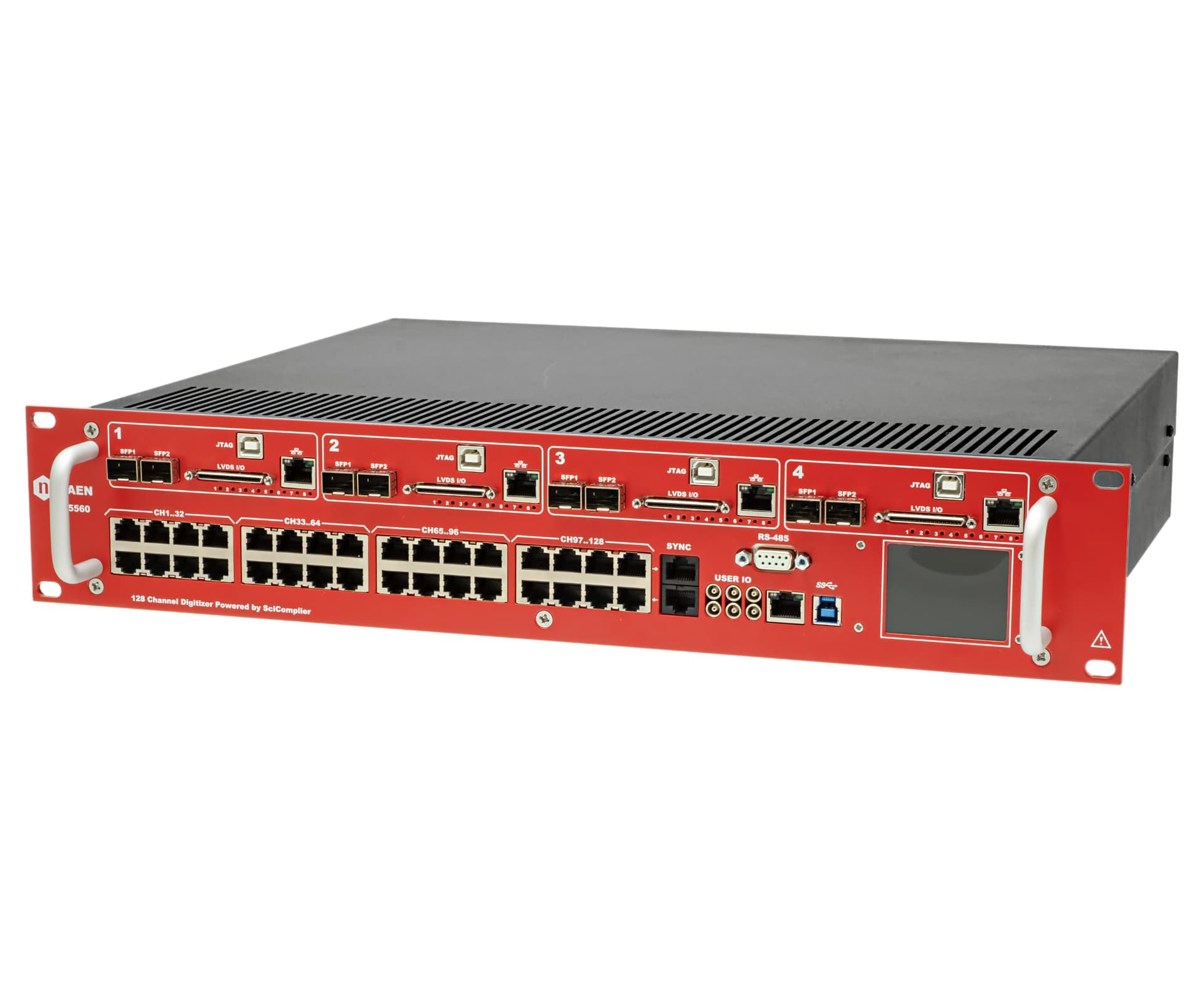 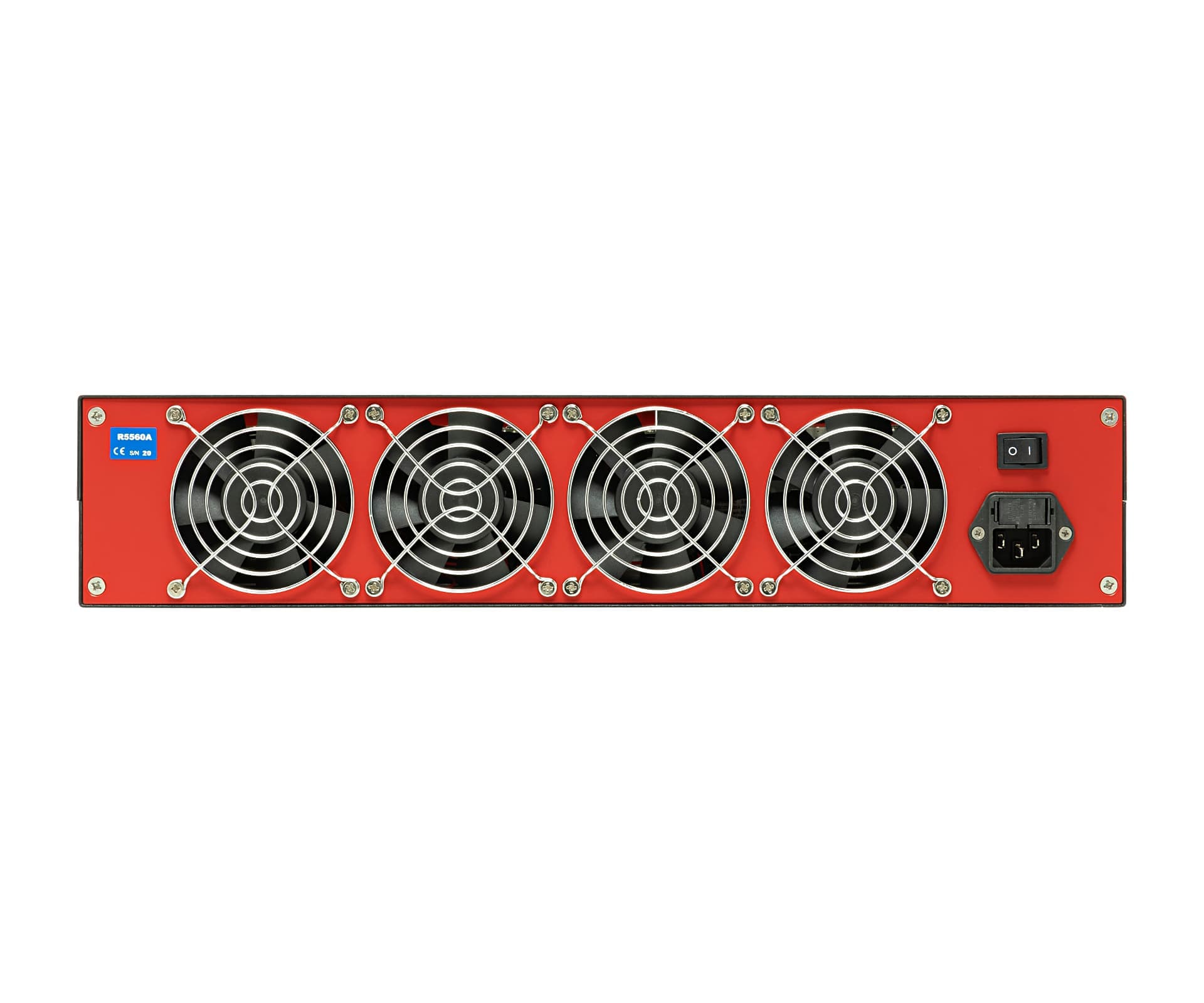 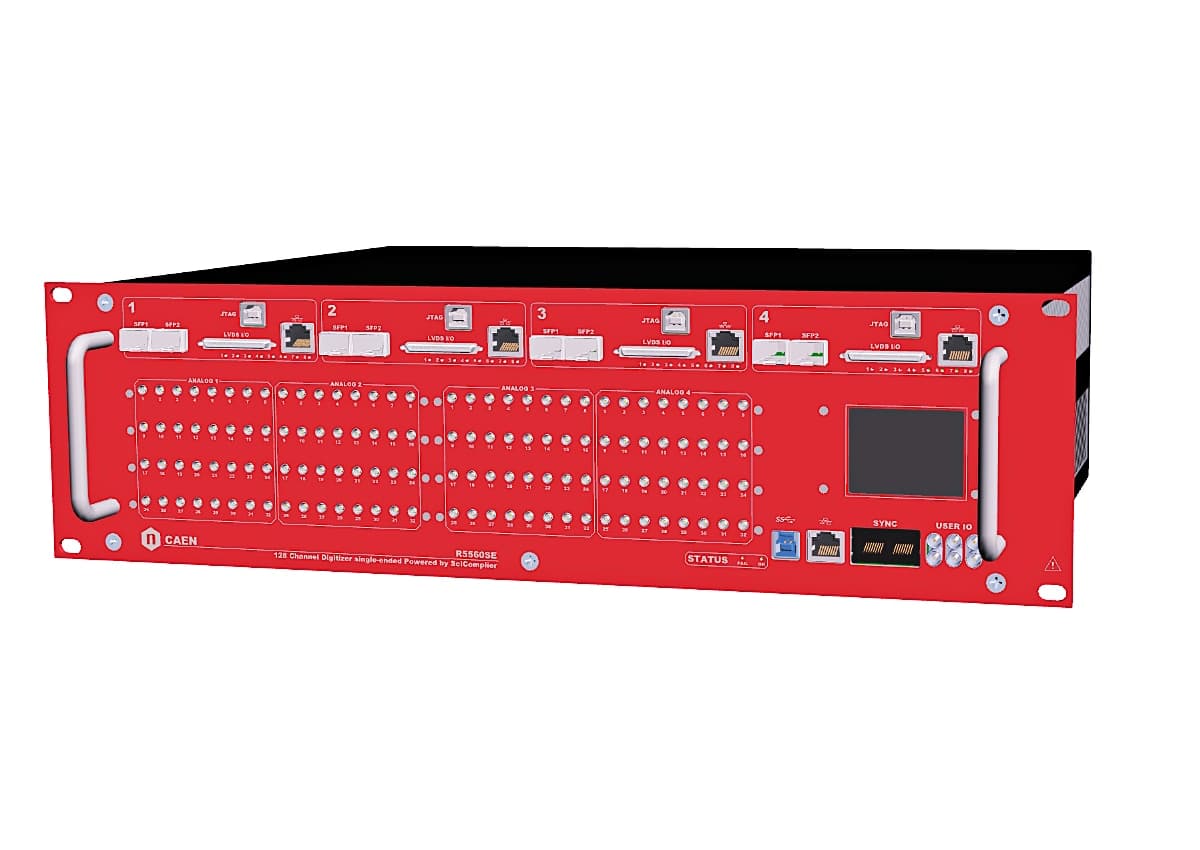 The R5560SE is designed for the readout of large arrays of detectors (PMTs, segmented HPGe, Gas Tubes…) using a customizable platform and an advanced programmable front-end. In fact, it is possible to take advantage of the powerful SoC mounted onboard to write a custom pulse processing algorithm on the open FPGA as well as build a middleware/software that fits the needs of the application of interest. Moreover, the advanced Front-End allows to easily connect and manage most of the detectors commonly used in Physics Experiments.

The DT5560SE is designed as a solution for lab development, prototyping and system testing. Thanks to the 32 Single-Ended Channels on LEMO, it allows an easy connection to the detectors and speeds up the development time.

It is suitable for a wide variety of experiment in prototyping phase, especially for the readout of Physics detectors (like PMTs, Segmented HPGe, Gas Tubes, ….) in small setups, where it is important to have a compact system and the possibility to easily change the pulse processing algorithm.