The A2795 is a readout board, ideally suited for liquid Argon TPC (Time Projection Chamber).
The board is housed in a custom crate that contains 9 acquisition modules A2795, with 64 channels each. In total, one crate can read up to 576 channels. The analog signals coming from the detector can feed directly the inputs of the A2795s, in which the preamplifiers are arranged in arrays of plug-in hybrid circuits (8 channels each). This solution allows the preamplifier, which is detector and application dependent, to be re-designed or adapted to match the specific requirements.

Thanks to the feature of preamplifier on socket, the A2795 is also ready to use also in “Cold Option” configuration, using charge preamplifier front-end into the Liquid Argon and housing on board a custom voltage translators/amplifiers just for ADC dynamic range matching.

The preamplifier outputs are digitized by 12 bit 2.5MS/s ADCs and processed by the internal acquisition logic, implemented in a programmable FPGA, which provides the trigger logic, the data storage in local memory buffers and the readout through a proprietary optical link, controlled by the CAEN PCI express board A3818.
Thanks to this compact and modular solution, the readout electronics can be positioned very close to the detector, allowing the user to minimize the interconnecting cable length and its corresponding capacitance, reducing the noise. The optical fiber allows the system to be connected to the host PC as far as few dozens meters; the fiber guarantees easy cabling and absence of ground loops. One optical link of the PCI express card A3818 can control up to eight A2795 connected in daisy chain with the fibers. Because the A3818 owns four optical links, one single commercial PC can control and readout up to 2048 channels.
The system has been designed for the scalability: growing from a single crate with 576 channels up to experiments with thousands of channels is made easy by the TT-Link. This is a single wire bus (over a coaxial cable) connecting as many crates as needed, that distributes the same sampling clock to all the ADCs of the whole system and the same global commands, like triggers, start/stop acquisition, etc. thus keeping all the acquisition boards synchronized.
From the output of the preamplifier, the system operates as a waveform digitizer: the 64 serial outputs of the ADCs are connected to one FPGA which continuously reads the digital samples and writes them into an array of circular memory buffers. When the board is triggered, the FPGA saves the current buffer (i.e. an acquisition window); the event data are completed by a header and a time tag. The acquisition can continue without dead-time in a new circular buffer. A global trigger common to all the channels can be issued using software commands or an external signal.
CAEN provides a software package that contains the drivers for the PCI express board A3818, the libraries (in C) for the access to the optical link and some demos and examples of readout programs. Windows and Linux are both supported.

Plug-in hybrid circuits with 8 channels each

Global trigger for all the channels coming from the TT-Link, Front panel connector or SW command. 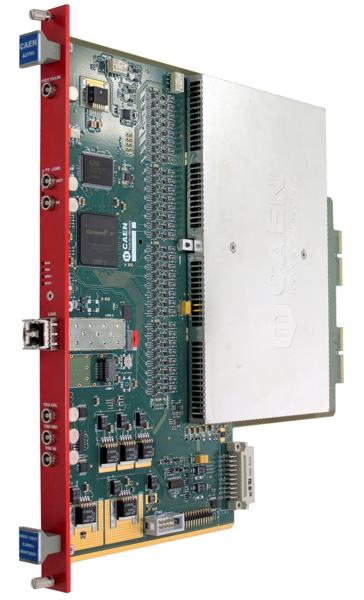